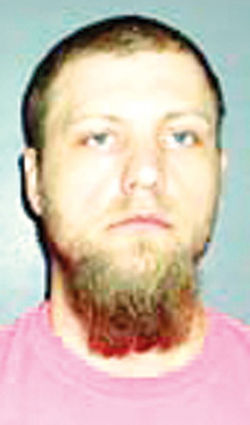 At the preliminary hearing in the State of Nebraska’s case against Gurley resident Justin Warren, representatives from both sides questioned investigator Zachary Goodrich and deputy Adam Hollingshead when they were called to the stand.

The judge denied Warren’s request for a bond reduction and an arraignment hearing is scheduled for May 20 at 8:30 a.m. in District Court.

The defendant faces a Class IC felony count for possession of methamphetamine with intent to deliver or distribute within 1,000 feet of a playground. According to court documents, on Friday, March 22 methamphetamine was found in Warren’s bedroom during a search by authorities.

Goodrich told the court that on March 22 he was asked by chief deputy Fred Wiedeburg to help in a child abuse case with possible narcotics involved.

Together the two later conducted a warranted search with the help of Hollingshead.

He said that they drove to the house, knocked on the door, explained there was a search warrant for the residence, secured and cleared upstairs, and ended up downstairs at a bedroom that was locked.

Goodrich said that two law enforcement officers took Warren, who claimed himself the sole occupant of the room, upstairs to sit on the couch while he and Hollingshead continued their search.

The room was secured, searched and photographed.

He said that a brown paper, cigarette-type box was also found that appeared to contain a crystal white substance.

Schaub asked Goodrich if he had a background in identifying drugs, and the investigator said that he had gone through extensive training for identifying narcotics and other drugs.

Schaub asked the investigator whether the test kit used during the field test of the white crystal substance was the same that he had always used when conducting tests and Goodrich said that sometimes the manufacturers of the kits were different.

Goodrich said he had watched Hollingshead conduct the tests and he believed the test to be reliable.

The substance had field tested positive to be methamphetamine, according to law enforcement. Goodrich said the amount of the substance had weighed in at about 12.2 grams with the packaging.

Schaub asked if he believed that the bag weighed less than 2 grams and the investigator replied that he did.

The attorney then asked Goodrich if he believed that 12 grams of methamphetamine was “a lot” for one drug users consumption. The investigator responded yes, but also said that each drug user is different.

The investigator compared it to a person that could get drunk from two beers as opposed to someone who would need 12 beers to become intoxicated.

Goodrich said that it was possible for a dealer of methamphetamine to get approximately $100 a gram and that “users don’t usually just sit on them.”

Schaub also asked for the approximate feet that the officer had measured from the park playground to the residence where Warren had been staying and Goodrich replied an approximate 940 feet distance when measured with a wheel display device.

Schaub asked the investigator whether or not it appeared that Warren was into the sale and distribution of methamphetamine from the evidence found.

Goodrich said that with 10 grams of the drug and the small and large bags it could appear that way, but he said that also buyers could weigh the drug amounts after purchase to make sure they hadn’t been ripped-off by the seller.

Breen, Warren’s defense attorney, asked Goodrich if there were other items that were taken from the bedroom into custody that were not on the inventory list.

The investigator responded that other items such as papers and a SIM card were also locked in the Sheriff’s office.

Breen showed Goodrich a picture of a map of Gurley and asked the investigator if the playground equipment was in fact on the south side of the area and closer to the other street across from the park than the street at which Warren had stayed.

The investigator responded that that appeared correct and Breen asked him whether the water tower and other points he measured from were considered “playground equipment.”

The attorney also asked if the investigator had searched any public records to identify the correct dimensions of the park and whether or not the ground it sat on had been dedicated as a Nebraska park.

Breen inquired as to whether or not Goodrich had looked up the dimensions of the property he measured from either – all to which the investigator said he had not.

The attorney followed by questioning how the investigator had learned about the call to the house in the first place.

He replied that although he had not talked directly to anyone from HHS, a call had been made to their hotline regarding potential child abuse.

The investigator told Breen that he had not previously kept watch on the house until asked to accompany his team to the residence.

Breen also asked Goodrich if the crystal white substance had been submitted to the Nebraska State Patrol. The investigator reported that it had not.

Breen wondered if the investigator usually sees a spike in drug use in April when people receive their tax returns. Goodrich answered that there was really no noticed difference.

The attorney then asked the investigator about “eight balls.” He asked if he was correct in the statement that eight balls are approximately one-eighth of an ounce of a substance and that they are the common amount sold to buyers and sold better than an ounce.

The investigator responded that that was true.

Breen was told that, after the initial discovery, the team did not seek another search warrant. The investigator pointed out, however, that like in the incident of a car, if some is found in the car it is legal to search the whole vehicle.

Schaub asked Goodrich if the envelopes in the box were addressed to Warren and he said they were. The investigator also agreed that the amount of drugs found could cost $1,000.

Goodrich also told Schaub that he did think that the farthest away area of the playground could fall within 50 to 75 yards away from the original measurement spot in the park.

Schaub called Hollingshead to the stand and the deputy told the court that he took out the small amounts of the substance and had ran the field tests on the suspected methamphetamine just as the instructions on the test kit ordered.

Schaub reiterated that the amount of methamphetamine found was a substantial amount.

Breen said that the evidence of the controlled substance should have been chemically tested for the most accurate results.

He also stated that there was no apparent money found at the scene and that sometimes drug users keep small baggies with them because if they are addicted they most likely carry small amounts of the substance around with them wherever they go.

Breen also said that the water tower was not considered playground equipment and that the distance to the residence was not measured from the most accurate spot.

Both attorneys disagreed on whether or not the case was one of possession or possession with intent to deliver.

Breen also asked Judge Randin Roland to lower Warren’s bond to $25,000 at 10 percent so that Warren could go into a temporary work service to help support his three children and fiancé.

Schaub suggested to the judge that due to Warren having “habitual criminality,” and serving time in prison for two prior felonies that he should not be awarded the bond reduction.