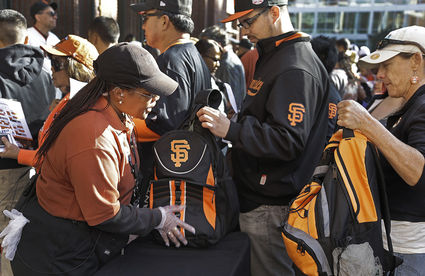 In this photo taken Tuesday, April 23, 2013, fans have their backpacks searched by security personnel prior to entering AT&T Park for a baseball game between the Arizona Diamondbacks and the San Francisco Giants in San Francisco. Major League Baseball’s previously scheduled security meeting in New York took on added importance in the aftermath of the marathon bombs. Each team sets its own security standards, although clubs might consider cutting the size of the general major league limitation on bags from 16x16x8 inches to something less.

Left unattended, no accessory looks as menacing these days as a backpack.

At the airport. On the subway. At a sports event.

And, as a result of the two backpack-encased bombs that exploded near the finish line at the Boston Marathon, sports teams and leagues around the world are rethinking what kind of bags, satchels, purses and, yes, black nylon backpacks should be allowed inside stadiums and arenas.

The packs will even be the focal point of a conference this summer of stadium-security personnel in Orlando.

“After what happened ... I wouldn’t be surprised if the number of people elimin...