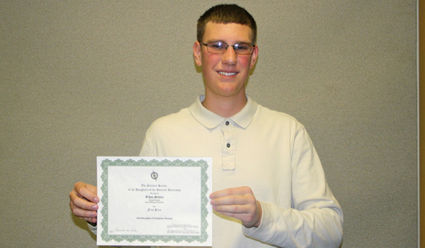 Ethan Nelson not only won the local Daughters of the American Revolution Fort Sidney Chapter’s American History Essay Contest, but he also won the state competition for his essay on the topic “How did the Faith and Courage of Christopher Columbus give to Mankind a New World?” His essay has been sent on to the regional competition.

“The history of Christopher Columbus is widely acknowledged to be filled with gaps and inconsistencies, contradictions and misdirection,” was how Ethan Nelson began his local and state winning paper for the Daughters of the American Revolution (DAR) American History Essay Contest.

Nelson won both the local and state competition this year and his work has now been entered into the regional competit...