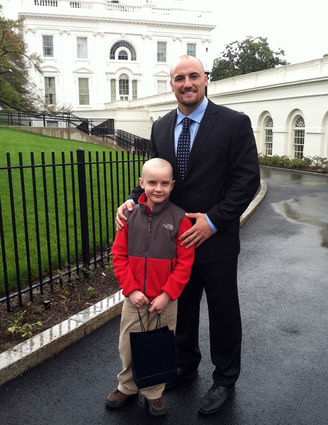 (AP) – The 7-year-old cancer patient who became an Internet sensation for his touchdown run in Nebraska’s spring football game has yet another fan — President Barack Obama.

Jack Hoffman, his family and former Cornhuskers running back Rex Burkhead visited Obama for 15 minutes in the Oval Office on Monday. Obama presented Jack with a new football and told him he was proud of him.

“I thought it was awesome,” Jack said.

Burkhead, who was drafted by the Cincinnati Bengals on Saturday, befriended Jack shortly after the boy was diagnosed with brain cancer in 2011. Their friendship led to...