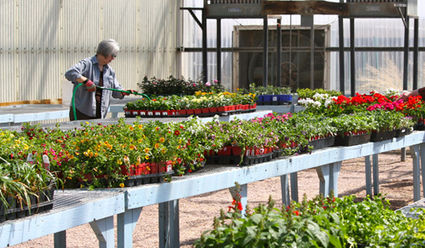 Excited for spring, Teresa Grant, owner and operator of Sidney Floral and Gift Shop, and her master gardeners received their first load of plants and flowers yesterday as part of their second Sidney Floral and Greenhouse Too! event.

The arrival of the truck full of plants yesterday marks the first day plants at the greenhouse will be available for purchase, and the event will last until June 15 - if the weather stays cool enough for the plants.

“We will close June 15 and that’s tentative depending on the weather,” said Grant. “Last year it got so hot that it was 122 (degrees) in the greenhouse.

“You can’t expect customers to be in there or your employees – you can’t do that to them,” she said. “If the weather stays cool and people still need to plant, I’ll stay open. But last year it was so hot that no one could do anything.”

Grant said that she began hosting this spring event because it was something the community asked for and needed.

The flower and gift shop owner said that the event was a huge success last year.

“They were a little more expensive but well worth it.”

Grant said that the customers can pick anything they want to buy out of the greenhouse located at 1111 Greenwood Rd.

“We’ve got vegetables, pretty flowers, and a really good selection of decorative grasses for your landscaping,” she said. “We have thousands of items. It’s a full greenhouse and this is a big, full-scale project.”

Grant said that she buys little plants to be sold, but that is not all that is offered at the greenhouse.

“We do custom containers for people,” she said. “They can bring their containers in and we’re so happy to fill them up for them and we have lots of garden accents, garden stakes and a lot of different things out there.”

However, the storeowner added that they will not be selling fertilizer this year.

Today a shipment of pre-planted planters are set to be delivered to the greenhouse, and the structure will be filling with luscious greens into the weekend.

Grant also said that she tries to adapt her plant varieties to what the community needs and wants.

She said that either her or her certified master gardeners will be at the greenhouse during those times to help customers with their purchases or in designing planters.

“Come straight out to the greenhouse, our master gardeners will be there,” she said.

Grant said that if people continue to enjoy the greenhouse event and it is a success, she hopes to keep the sale going year after year to supply the city of Sidney with spring flora.

“We’re giving it another try this year because it really is something that the community needs,” she said. “You can play, it’s fun, and it’s an adventure. It’s not just your typical greenhouse with row after row after row of flowers.”

Grant said that the greenhouse has been in Sidney ever since she can remember, and that she shares it with Raffelson Rock Co.

“B.J. (Raffelson) does the rock and I do the flowers,” she said. “It proves that rock and flowers can mix.”

The storeowner said that flowers make people happy and are needed to lift up spirits after a bland winter.

Grant said that this event gives residents a chance to spice up their yards and play in the dirt.

“Flowers are the Earth’s way of smiling,” she said.