Across The Fence: Black Hills Gold and the Thoen Stone 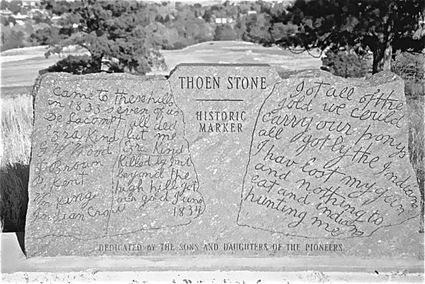 On January 24, 1848 near a little sawmill on the South Fork of the American River in Colona, California, James Marshall raised a fistful of yellow nuggets and started a stampede of fortune seekers with a single word, “Gold!”

Sutter’s Mill would forever be indelibly inked on the pages of history and the Gold Rush was on. Over the next seven years more than a quarter of a million people would point their wagons toward California and pin their hopes on the promise of gold. Later discoveries in Colorado would fan the flames and fuel the frenzy of gold fever as thousands of emigrant wagons cut ever deepening wheel-ruts in the Oregon and California trails.

Although the discovery of gold at Sutter’s mill perhaps garnered the most attention, it was certainly not the first significant discovery of the “yellow iron” on the North American continent. Spanish explorers in the 1500s searched long and hard for the fabled cities of gold but never found them. Some historical records indicate that in the very late 1500s and early 1600s Spaniards did mine for gold in the Appalachian Mountains of the southeastern region of the continent and extracted significant quantities of gold. However, for whatever reasons, these facts were withheld from the outside world. Those were the lands of the Cherokee and their oral history tells that the Spaniards who mined the gold were all killed so that other men, from unknown lands, would not follow. For nearly 200 years, the secret of the gold was kept until the rediscovery of the old mines in the early 1800s.

By 1830, gold mines had been rediscovered in Georgia and in ten North Carolina counties and the frenzy of gold fever reached a pitch almost equal to the California gold rush. By 1890, these mines had produced more than $60 million in gold bullion. One nugget in particular weighed nearly thirty pounds.

In the Blue Ridge Mountains of Georgia there is the ghost town of Auraria and what remains of the Calhoun Gold Mine. In this area, as early as 1828 gold had been discovered. This is also the location where in 1539 DeSoto had searched for gold while killing and enslaving hundreds of Indians for refusing to show him where the gold could be found. In the 1828 gold rush of Georgia, more than $20 million in gold was mined in a period of ten years.

It was from this part of the country, in 1833, that two miners joined forces with a group of five other men who went in search of gold. One of these men was William King whose family settled in the land of the Cherokee in 1802. The other man was Indian Crow, a half-breed Cherokee of the Crow family. Both men were experienced miners and knew what to look for and how to extract the precious metal.

Along about this same time, William Thompson Brown, (who went by Tom or ‘T’ Brown) left North Carolina and settled with his wife, Miss Hibbets, in Troy, Missouri. Having mining experience, T Brown went to work in the lead mines of LaMotte. In 1832 his fourth child, Elizabeth, was born. The mother did not survive the birth and T. Brown left his children with friends and family and disappeared. His son remembered his father pacing the floor the night before he left. “My son,” his father said, “I hope you a long life, but that you will never walk the floor for the same reason that I do tonight.” The Brown family history claims that Thompson went west with a man named Kent and were never heard from again.

From Pawlet, Vermont a man by the name of Robert Kent is said, by family members, to have gone west in the early 1830s. His family tells that during his absence he wrote only one letter home, stating that he and the men he was with had found all the gold they wanted and were on their way home. Nothing was ever heard from him again.

In the region of the Black Hills, also early in the 1830s, lived a French trapper by the name of Joseph LeCompte. LeCompte was a friend of the Indians and had taken an Indian wife, as was often the custom of many mountain men. LeCompte was perhaps the epitome of the legendary early men of the mountains. It was said that he could out-run, out-lift, and out-do any man, white or Indian, in any and all tests of physical strength. LeCompte was admired and respected by the Indians and was also in the employment of The Hudson Bay Company. Before marrying into the tribe, he often bragged of knowing the whereabouts of much gold in the Black Hills.

From Saxony, Germany Doctor George Kind immigrated to America with three sons, Ezra, Charles and George. Ezra was the eldest of the three, born around 1816. Family members remember their great-grandfather talking about a grandson named Ezra who ventured west to search for gold and was never again heard from.

Nearly 55 years later, in March of 1887, two men were searching for sandstone deposits around the base of Lookout Mountain above the Spearfish Valley of South Dakota’s Black Hills. Louis Thoen and his younger brother Ivan were looking for sandstone to be quarried for construction of a building in Spearfish. Most of the sandstone structures standing in Spearfish, South Dakota are built from stone quarried by these brothers.

While digging down to a layer of sandstone, Louis came upon two relatively large slabs of stone, several feet below the surface. One stone was stacked on top of the other and when Louis lifted the top stone, a smaller slab lay between the two. This slab was about 8 inches wide by 10 inches long and nearly three inches thick. The page-sized tablet appeared to have writing etched on the surface and a quick swipe of the hand revealed the words, “Indians hunting me.” Later, Louis cleaned the stone tablet and revealed this message:

On the opposite side of the stone tablet was this message:

“Got all of the gold we could carry. Our ponys all got by the Indians. I have lost my gun and nothing to eat and Indians hunting me.”

The stone tablet has become known as the Thoen Stone.

In 1834, forty-one years before Custer’s expedition to the Black Hills to seek out the possibility of gold deposits in that South Dakota Territory, a group of seven men organized themselves into a private expedition in search of gold. They discovered that gold in the Black Hills near present day Spearfish, South Dakota beyond “the high hill” of Crow Peak on Spotted Tail Gulch.

During the Black Hills gold rush of 1876-77 placer miners dug for gold on Spotted Tail Creek and found the remains of an old cabin. Nothing was left of the cabin except for a few of the base logs and at the center of the foundation grew pine trees as much as nine inches in diameter and many feet high. Could this have been the cabin of the seven? Also, near the site, miners dug shafts to bedrock and found, thirteen feet below the surface, a rusted shovel and pick. These items, so far beneath the surface were certain signs of active mining many years, perhaps decades, before.

Of the seven men, five have been reasonably traced to families that had relatives who went off in search of gold and never returned. Family members tell of a relative Wm. King who went west with a gentleman named Kent. T. Brown and Indian Crow left from the same North Carolina community to go west and were never heard from again. R. Kent and Ezra Kind also left family to seek their fortunes and left behind notes claiming to have found all the gold they could want, but never returned home.

Only G.W. Wood remains a mystery.

Joseph LaCompte’s family claim that Joe died of old age and was buried in an Indian grave near Wheeler, South Dakota. That graveyard lies under water at the Fort Randall Dam. Perhaps old Joe was quick enough and strong enough to escape the slaughter that took the others. It is possible that Ezra, who scratched the note on the sandstone tablet, did not know he had escaped and presumed him dead.

Ezra Kind’s last words were inscribed in stone. Carefully carved, in his final hours, with determined and deliberate strokes of a blade, Ezra recorded the fate of his companions and resigned himself to the same. These seven men may well have been the first white prospectors to discover gold in the Dakotas. Their deaths, at the hands of those who protected their land, not only robbed them of their treasure, but helped to preserve the sanctity of the sacred Black Hills for a fleeting, forty more years.

Forty precious years that ended when Custer’s expedition of 1875 once again raised the greedy cry of, “Gold!”