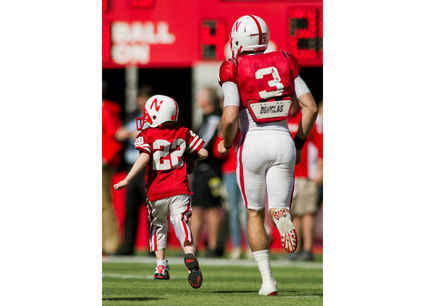 FILE - In this April 6, 2013 file photo, Nebraska quarterback Taylor Martinez (3) guides cancer patient Jack Hoffman, then 6, of Atkinson, Neb., down the field for a touchdown play during a special segment dedicated to Hoffman in the second half of the Red-White spring NCAA college football game at Memorial Stadium in Lincoln, Neb. Jack captured the hearts of football fans when, with the help of the players, he ran for a touchdown during an intra-squad game that ended spring football practice earlier this year. The scoring scamper has been replayed on national TV and viewed nearly 8.4 million times on YouTube and was voted by Nebraska editors as the number one story of 2013. (AP Photo/Lincoln Journal Star, Matt Ryerson, File)

OMAHA, Neb. (AP) - A touchdown run by a 7-year-old boy with cancer has been voted by Associated Press newspaper and broadcaster members as the top Nebraska news story for 2013.

The 69-yard scamper by little Jack Hoffman occurred during the spring intrasquad game. Jack's pluck and the players' aid captured the hearts of Nebraska football fans and people who saw a YouTube video that's received nearly 8.4 million viewings. The video was played over and over on national television and it won an ESPY award as the "Best Moment."