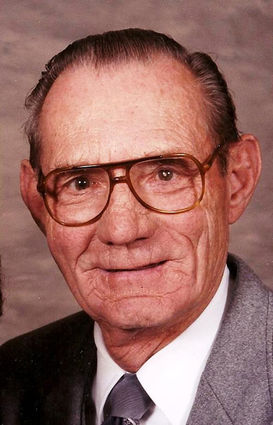 Funeral services will be held at 11 a.m., Mon., March 31, 2014 in the Weyerts Immanuel Lutheran Church east of Gurley with Pastor Eric Alm officiating. Burial will follow in the Weyerts Cemetery.

Memorials have been established to the Weyerts Immanuel Lutheran Church.

Friends may call from 2 p.m. to 7 p.m. Sunday at the Holechek Funeral Home in Sidney with the family present from 5 p.m. to 7 p.m.

You can view the online obituary and share condolences with the family at http://www.holechekfuneralhomes.com

Orvil Henry Krauter, the son of Frank and Lillie (Bucklehide) Krauter was born June 16, 1913 at Clatonia, Neb. He moved to the Cheyenne County area with his parents in 1917.They farmed 11 ½ miles east of Dalton. He only went to the eighth grade because he wanted to help his dad on the farm. He started working with horses until they bought a tractor. He loved to see things grow.

He was married to Florence Thompson on Nov. 18, 1936 at the Immanuel Lutheran Church north Lodgepole in the Weyerts community.They farmed east of Dalton until 1946 and that's when Leroy was born.They then moved to Dalton and he went to work at Dalton Chevy as an auto mechanic and another son, Larry was born.

They moved to Sidney late in 1950 and the last of three sons, Lawrence was born. Orvil started working at Joe Hahlor's Dealership as a mechanic and then worked at several other dealerships in the area. He loved working on cars and was good at it.

He went to work at the Sioux Army Depot and worked there until it closed. Rather than take a transfer he went to work at Stickney's, Inc. until he retired at the age of 63 in 1976.After a couple of years he went back to farming, first for Lou Jurgens and later Lawrence Thompson before retiring for good when he was 81.He enjoyed every minute of farming, it was in his blood.

Orvil loved life. He was a good father, grandfather and great-grandfather. He loved working with his hands and could build anything. He was a jack of all trades. His hobbies were gardening and craftsmanship. He built a replica of the old homestead, including the buildings, machinery and fields they worked. He was very proud of it.

In the early years he and his wife traveled to southern California to visit family and later to any place the boys lived to visit them.

He was a member of the Weyerts Immanuel Lutheran Church and had a strong faith he believed in.

Survivors include three sons: Leroy of Springfield, IL, Larry of Sidney, and Lawrence and wife Kerry of Phoenix, Ariz .; four grandsons: Michael and wife Dawn of Darien, Ill., Jeffrey and wife Kelly of Phoenix, Jeremy and wife Karen of Chandler, Ariz. and Ryan and wife Kelly of Queen Creek, Ariz .; eight great-grandchildren: Matthew, Samuel, Zachary and Steven of Darien, Sterling of Chandler, Kravin of Phoenix, and Abby and Ella of Queen Creek; two sisters: Gloria Sanders of Gering, and Mildred Kreader of Bridgeport; one sister-in-law Doris Davison of Hemet, Calif. and numerous nieces and nephews.

Holechek Funeral Home and Cremations in Sidney is serving the Krauter family.