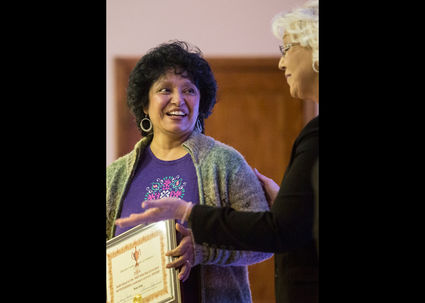 More than 225 local businesspeople turned out Wednesday night for the Cheyenne County Chamber of Commerce's annual banquet. At left, Rose Gray of Safeway receives her award for "Individual of the Year Who Provided Outstanding Customer Service" from 2014 Chairman Paula Abbott.

Several awards were handed out Wednesday night at the annual Cheyenne Chamber of Commerce banquet held at the Sidney Elks Lodge.

The 2015 chairman, Brooke DeNovellis, officially took the gavel from 2014 chairman Paula Abbott at the event as well. DeNovellis is an agent with Farmers Insurance, while the outgoing chairman, Abbott, is the director of Western Nebraska Community College's Sidney Campus.

Chris Gabis served as the master of ceremonies at the event, which about 225 people attended.

The chamber's president and CEO Glenna Phelps-Aurich announced that the chamber had added 28 new memb...