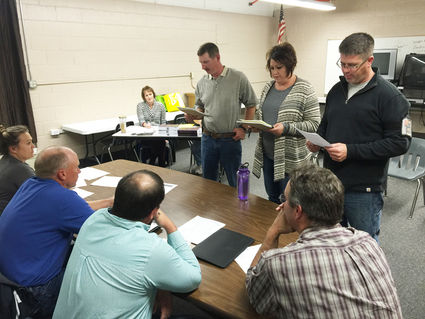 Leslie Raffelson / For The Sun-Telegraph

Standing, from left, Nick Fehringer, Tiffany Vallier and Mike Hill are inducted onto the Peetz Plateau School District Board of Education at a meeting on Tuesday evening.

Outgoing members Lanae Fehringer, Gary Gillham and Gary Schumacher were presented with certificates honoring their service to the school district.

Nick Fehringer, Tiffany Vallier and Mike Hill, who won election to the board of education during Colorado's November election, were also officially inducted onto the board. Their terms are each four years.

Filling out the five-seat board are president Brad Segelke and vice president...