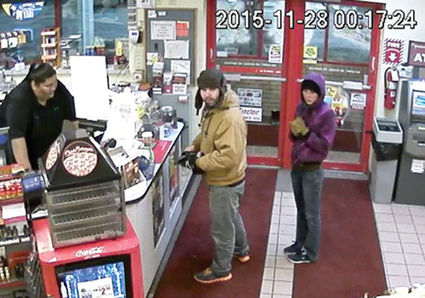 Two people allegedly held up Gator's Travelyn Motel in Pine Bluffs, Wyo. on Saturday. The two were allegedly seen above, at center and right, in Sinclair truck stop as shown in this surveillance photo. They remain at large.

A Pine Bluffs, Wyo., motel was held up over the weekend, and the suspects remain at large.

At about 1:45 a.m. Saturday, a caucasian male and female held up the office of Gator's Travelyn Motel and made away with an undisclosed amount of cash.

They originally walked into the office together, spoke to the man who was on duty, and then the male suspect walked back outside. When he returned, he was brandishing a firearm and demanded that the clerk on duty empty the cash drawer. The clerk was then duct-taped to his chair and the pair left.

The clerk, who was able to free himself from the duct t...