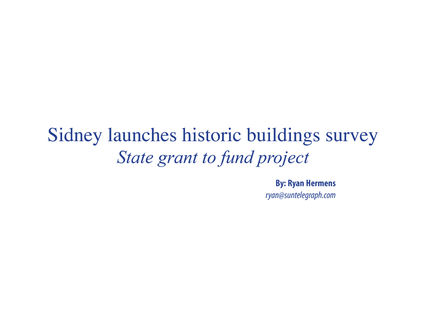 A team of researchers is set to document and catalog historic buildings in Sidney.

"On-the-ground work for a historical and architectural survey of 175 buildings in downtown Sidney will begin in December, weather permitting," a release from the City of Sidney states.

"Researchers will be taking exterior photographs of buildings and notes on the architecture," the release adds. "All survey work will be conducted from the public right-of-way."

Tina Hochwender, the city's economic development director, said the project stems from a plan prepared by the City of Sidney Historic Preservation Board in 2014. The document outlined goals and objectives for a several year period, including the historic buildings survey.

The research to be conducted "will update and expand a 1994 survey of the area, providing historical background, architectural detail and current photographs for each building included," the release adds.

The Sidney Historic Preservation Board was awarded a $25,000 grant from the Nebraska State Historical Society to fund the project.

Front Range Research Associates, of Denver, was awarded the bid to conduct the research.

"The project will produce survey forms and a report and will extend over several months," the release states. "A public meeting to present the results will be held next April."

A copy of the completed document will also be submitted to the state preservation office in Lincoln.

"Residents and business owners are encouraged to contact Hochwender or Front Range with historic photographs and information on specific buildings," the release states.

Hochwender said the project would generally encompass buildings dating prior to 1980.