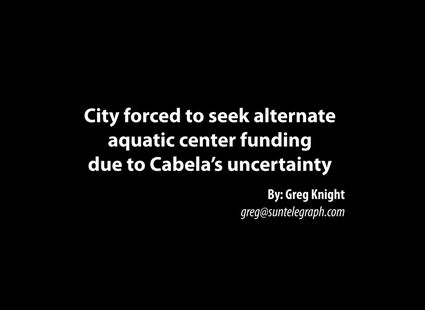 Uncertainty about the future of Cabela's has trickled down to the City of Sidney's financing of the aquatic center.

The bonding agency for the city, Ameritas Investment Corp., has declined to sell bonds to fund the $5.4 million aquatic center under construction at Legion Park due to concerns about Cabela's and whether the retail giant will remain headquartered in Sidney, according to interim city manager Geri Anthony. She said the city was notified approximately three weeks ago that the bonding agency would not sell bonds to fund the aquatic center due to concerns about a rumored sale of Cabela's to Bass Pro Shops.

After the notification by the bonding authority and the city's unsuccessful attempt to seek assistance from local banks, mayor Mark Nienheuser said U.S. Bank in Lincoln had agreed to underwrite a $4 million loan via a 15-year note at an interest rate of 2.9 percent.

Under the terms of the loan, the city would make annual payments of approximately $381,000 and a balloon payment of $1.8 million at the end of eight years, in 2023.

The council approved the plan, which involved three possible payment options, on a unanimous vote.

Of the three options presented by U.S. Bank, the one approved by the council involved the lowest annual payment. The two other options would have cost the city between $400,000 and $420,000 per year, though the balloon payment would have been lower, averaging about $1.6 million.

The city would also have the ability to pre-pay the principal down before the balloon payment comes due.

"The question is, how much are we comfortable in paying for the project," Nienheuser said during discussion. "Remember, we've got a $5.4 million pool and we're in the process of raising a million dollars, of which we're still $270,000 short of that million. So, that leaves us with a $4.4 million project to finance."

According to Nienheuser, roughly $700,000 has come out of sales tax collected by the city to pay for the center. That leaves a remaining balance of $3.7 million to finance.

"This will give us the long-term financing we need to move forward with the swimming pool," Nienheuser said. "We're doing this because the option to sell the bonds did not come through. Until the bond market knows whether Cabela's will stay or go, they were unwilling to issue the bonds, so we had to go with a more conventional financing route."

The next step, according to Nienheuser, will be for the city attorney's office and attorneys from U.S. Bank to draft a final loan document. That final draft will likely be discussed and voted on during the council's Jan. 26 meeting.