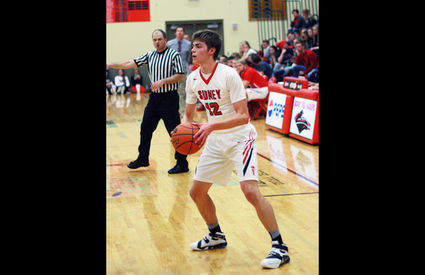 Sidney senior Ryan Birner led the Red Raiders in scoring against Torrington (Wyo.) on Monday night with 16 points. The game was Sidney's first-round appearance in the 2015 Cabela's Holiday Shootout.

There was never a doubt Sidney would win the game; the Red Raiders never trailed and had a 36-15 lead at the half.

It was also a game where six Sidney players – Brady Radcliffe, Jake Burke, Ryan Birner, Yeager Price, Mitch Porter and Cutter O'Connell – would hit three-point shots that were crucial in either keeping or extending the Red Raider lead.