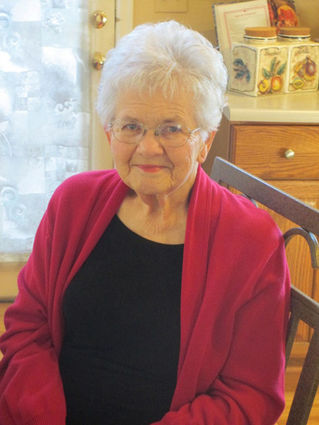 Wilma P. Vencill, 84 of Kimball, died at the Kimball County Manor on Saturday, Jan. 16, 2016. Funeral services will be held at 10 a.m. on Saturday, at the E-Free Church in Kimball with Pastor Hod Boltjes officiating. Burial will be in the Kimball Cemetery. Friends may call at the funeral home on Friday from 1 to 6 p.m., with family present from 4 to 6 p.m. Please visit http://www.cantrellfh.com to view Wilma's Tribute Wall and leave condolences for the family. Memorials have been established to the Kimball E-Free Church, Kimball County Manor or Prairie Haven Hospice. The services have been entrusted to the Cantrell Funeral Home.

Wilma Pauline Vencill was born in Sidney on June 18, 1931, the daughter of James Christian and Aleata Wilma (Reineka) Johnson. She lived southwest of Potter with her family and attended Country School at District 31, which was called Dye School. She then attended Sidney High School and graduated in 1949. Wilma attended Kearney State Teachers College and earned her teaching certificate. Her first teaching assignment was at District 4 (Owasco) east of Kimball. This was a two teacher school and Wilma taught with Beverly (Shaw) Ramsey for two years. She then worked at the Sioux Ordinance Depot for a year. Wilma went back to teaching and taught Kindergarten at Dix Public Schools for a year. Wilma was married to Jack Vencill on June 7, 1953, at Trinity United Methodist Church in Kimball by Rev. Don Littrell. This union was blessed with 4 children: Susan, James, Pamela and Jennifer. Wilma worked for Fred Enders at the Smith Enders Land Company. She then worked for the Kimball County Superintendent of Schools, the Kimball Sale Barn, George Risk Industries and for Bill Batterton for 17 years. She had a fun job delivering balloons for Judy Brighton. Wilma enjoyed teaching Sunday school, she also enjoyed playing the organ or piano for church services, weddings and funerals. Music was a big part of her family's life.