By John Verser
Publisher of the Sun-Telegraph 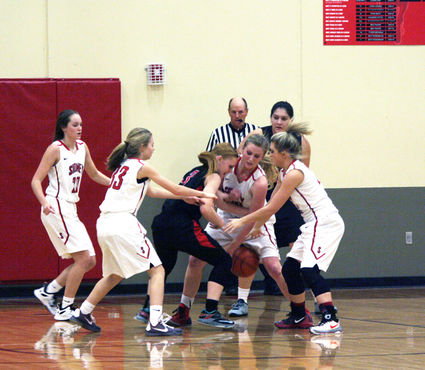 John Verser / Publisher of the Sun-Telegraph

A trio of Sidney players battle for the ball Friday against Scottsbluff. From left are Sidney's Meaghan Ross, Scottsbluff's Chloey Reifschneider, and Sidney's Annalise Lecher and Abbey Mills.

A smothering defense and a solid rebounding effort proved to be the winning combination for Sidney on Friday night.

The Lady Raiders limited Scottsbluff to just eight points through three quarters as they picked up a 39-15 victory.

"We did a really good job focusing on kind of their big three that do most of their offensive scoring for them, Chloey (Reifschneider), Zoe (Holscher) and Aly (Camacho)," said Sidney coach Tyler Shaw. "The girls did a good job. We played with extreme effort. We did a great job boxing out and limiting their second chances. I think that was one of the keys to the g...