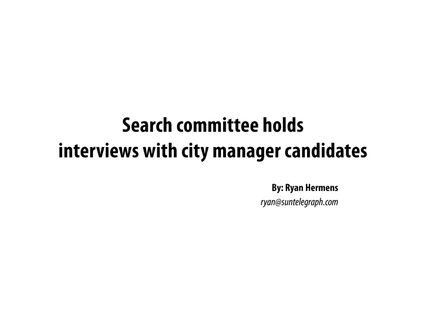 Three candidates shortlisted for the Sidney city manager position were in town Tuesday for interviews with the search committee tasked with making a final recommendation to the Sidney City Council.

At Tuesday's city council meeting, the council entered a closed session to discuss the candidates with members of the search committee and representatives from J.D. Gray Group, the executive recruitment firm retained to assist in the hiring process.

The search committee is comprised of members from the city council and business community.

Mayor Mark Nienhueser said the city will soon begin discussions with the top candidate regarding the terms and conditions of a possible contract.

"There is a contract that needs to be negotiated and put in place for the new city manager," he said. "We hope to get into that and be done by the middle of next week."

At Tuesday's city council meeting, the mayor said he heard conversations questioning if the expense of using the recruitment firm's services was worth it.

"I would just like to reassure the citizens that it was," he said.

"J.D. Gray and Associates has done an exceptional job," Nienhueser said, "and very thorough and very professional in regards to looking at a lot of things."

The money was well spent, he said.

"I can assure the citizens it was worth the investment," the mayor said.

Also at the meeting:

"It's still pretty dark out that way," he explained during a phone interview on Wednesday.

To save money, the city elected to install the street lights itself, Gaston said.

"Then the weather turned bad and it's taken a little longer than expected," he said.

At the meeting, Ben Dayton, Sidney Zoning Administrator, said the lights will be installed as the weather improves.

Gaston also asked when signs, including those with the blue square and a white "H," would be put up.

Dayton replied they have been ordered and will be installed soon.

• After a public hearing, the council unanimously voted to purchase 11 lots in north Sidney for a total of $5,500. The properties are near 11th Avenue and Lawrence Street.

In a memo to councilors, Dayton said the current owner had approached the city and asked if it was interested in purchasing the lots.

"City staff is in favor of the purchase of these lots due to the close proximity of the two water tanks located nearby," Dayton explained. "Also, an access road that the city uses to reach these tanks runs through this property."

Council Joe Arterburn asked how the purchase price was reached.

Dayton said it was at or below the properties' tax values.