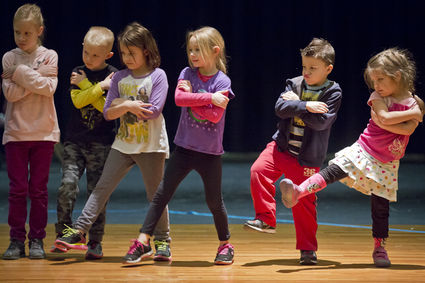 More than 60 youth have been cast in a performance of "Sleeping Beauty." The actors will take the stage at the Sidney High School Performing Arts Center on Saturday for a public performance. The cast and crew have been working throughout the week with staff from the Missoula Children's Theatre on preparations. In addition to Saturday's performance, the play will be performed at area schools on Friday.

Dozens of area youth have been rehearsing this week in preparation for a public performance of "Sleeping Beauty" at 7 p.m. on Saturday at the Sidney High School Performing Arts Center.

Molly Malady and Whitney Ward, of the Missoula Children's Theatre, are the production's directors and having been working with the actors since parts were cast on Monday.

The High Plains Arts Council is sponsoring the performance.

"Sleeping Beauty" is an original adaptation of the classic fairy tale.

"One simple mistake is made – an invitation is misplaced – and the wrath of vicious Scarella falls upon th...