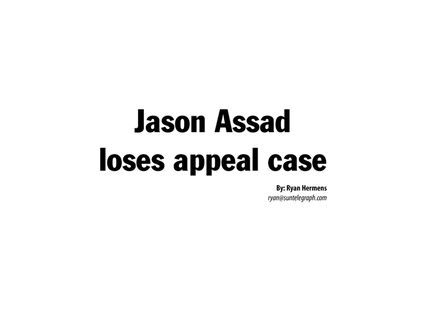 The Nebraska Court of Appeals ruled against Jason Assad last week when it affirmed a trial court's conviction of the Sidney man for first degree false imprisonment, terroristic threats, use of a weapon to commit a felony and two counts of felon in possession of a deadly weapon.

Assad, who turns 37 on Sunday, was convicted of the charges on April 17, following a three-day trial.

It took a Cheyenne County jury of seven men and five women less than three hours to reach its unanimous decision last year.

On June 12, District Court Judge Derek C. Weimer sentenced Assad to 35-47 years in prison. With two prior felony convictions, he was determined to be a habitual offender, meaning he will serve a mandatory minimum of 35 years.

Assad is currently serving out his sentence at the Nebraska State Penitentiary in Lincoln, according to the Nebraska Department of Corrections.

Following his conviction and sentencing, Assad appealed to the Nebraska Court of Appeals.

His attorney, Maren L. Chaloupka, argued in a court brief that the district court erred by not granting defense motions to suppress certain pieces of evidence.

She alleged searches of Assad's residence, where evidence was gathered that was used against him in court, were not made in good faith.

"All of the evidence seized in the searchers are, thus, 'fruit of the poisonous tree," she argued.

Nebraska Assistant Attorney General Nathan A. Liss, however, said because that issue was never raised at the trial, it could not be the foundation of an appeal.

"Failure to object to evidence at trial, even though the evidence was the subject of a previous motion to suppress, waives the objection, and that party will not be heard to complain of the alleged error on appeal," Liss wrote in a court brief.

In December, the state requested a summary affirmance – essentially asking the court to rule Assad's appeal had no basis. Last week, the Nebraska Court of Appeals granted the motion and affirmed the trial court's findings.

Assad can appeal his case further to the Nebraska Supreme Court. He has until late February to file the required paperwork.

Cheyenne County Attorney Paul Schaub, who prosecuted Assad during his initial trial, declined to comment on last week's decision since another appeal could still be filed, he said.

Phone calls to the Nebraska Attorney General's Office and Chaloupka, Assad's attorney, were not returned before press deadline on Friday.

Assad's case stretches back to Sept. 14, 2014, when he was arrested following a reported domestic dispute. Police were called to a local hotel he owned for a report of a woman screaming in distress. Initially unable to locate anyone, police obtained a search warrant for the living quarters at the El Palomino Motel.

Inside, they found Assad and a woman who had two black eyes and facial injuries. Assad was subsequently detained.

Law enforcement officers found digital surveillance equipment in the apartment, including a video camera in the bedroom. Footage recorded two days before his arrest showed Assad attacking the woman and preventing her from leaving the room. At one point, he held a knife to her face.