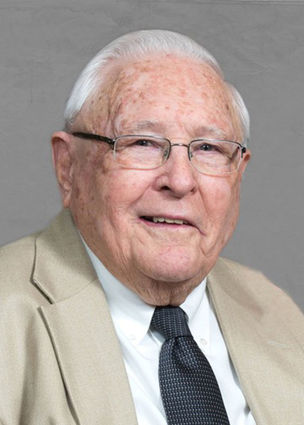 Ralph W. Englert, 88, of Lincoln, passed away Tuesday, Feb. 2, 2016. He displayed amazing strength and courage while battling multiple serious health problems over many years. He hoped that all who were associated with him during his battle know how much he appreciated their efforts and kindness. His courage and positive attitude during his illness is admirable.

In Lodgepole and Sidney, Ralph was active in the Elks, Lions Club, Volunteer Fire Dept. and at school functions. He was an active member of Immanuel Lutheran Church, where he served on the church council, as church treasurer, Sunday School Officer and member of the bell tower building committee.

Since moving to Lincoln, Ralph and his family are charter members of Southwood Lutheran Church. He helped with painting, maintenance, grounds or whatever it took to help keep the newly organized church maintained and growing. He served two different times on the church council, three years as president and was involved with numerous committees. He also chaired one of the efforts that built an addition to the original church.

After retirement from 24 years as Deputy Secretary of State and more health issues they sold their home and moved to Carriage Glen Senior Living in November 2003. Ralph was very active during his time there (served on the Board of Directors for 8 years, 7 of those years as President of the Board). The last 5 years due to his health he has not been able to participate.

Left to cherish his memory are his wife, Helen, of 66 years; daughter, Jorena Larsen (John), Lincoln; grandchildren, Jody Leonard, Georgia, Brandy Briggs and Michael Briggs, Lincoln, Nate Larsen (Kerry), Fremont, Andrew Larsen, Lincoln, Cassandra Briggs, Lincoln; great-grandchildren, Julia Leonard, Georgia, Jackson Larsen, Emily Larsen, Fremont, Chris Blevens, Kan. Ralph was a wonderful husband and dad but he excelled as a grandpa. We will miss him every day, but thoughts of him will warm our hearts and make us smile because of who he was.

Funeral Services were held Saturday, Feb. 6, 2016, at 10:30 a.m., at Southwood Lutheran Church, 4301 Wilderness Hills Blvd. Entombment was at Lincoln Memorial Park Mausoleum. Memorials are suggested to the Nebraska Lung Association, or the devoted and compassionate Tabitha Hospice. Local condolences may be left at http://www.gehrigstittchapel.com or dropped off at the Gehrig-Stitt Chapel.