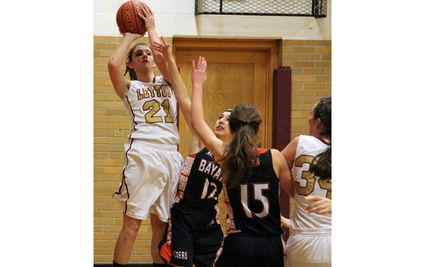 PCM Photography / For The Sun-Telegraph

Leyton's Abbe Draper, left, lifts a shot over a Bayard defender earlier this week. In Thursday's game, the Lady Warriors picked up a win against Garden County.

Leyton fell behind early but dominated the final three quarters in a 45-24 home win over Garden County in girls basketball action Thursday night.

The Lady Eagles (2-15) took an 11-8 early lead, but it was all Lady Warriors after that. Leyton outscored Garden County 6-1 in the second quarter for a 14-12 halftime lead, and then rolled by the visiting team by a 31-12 margin in the second half.