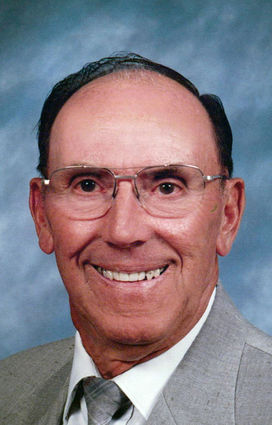 Funeral services will be held at 10:30 a.m., Friday, Feb. 26, in the United Church of the Plains-Trinity Site in Dalton with Pastor Eric Alm officiating. Burial will be in the Dalton Cemetery.

Visitation will be Thursday from 1 to 7 p.m. at the Gehrig-Stitt Chapel. Memorial contributions may be made in Jack's name to the Church or the Dalton Fire Department. You may view Jack's Book of Memories, leave condolences, photos and stories at http://www.gehrigstittchapel.com.

Jack was born March 7, 1931 to Harold "Pete" and Margaret (Martin) Worth in Dalton at George and Viva Worth's home. He attended Meadow lawn school from Kindergarten to 10th grade. Then he attended school in Dalton graduating with the class of 1948. His first home was a two room house near Meadowland school. When he was older they moved to the big house a mile away. He played football and basketball for the Dalton Tigers.

On Aug. 20, 1950 he married his high school sweetheart Evelyn "Evie" Klinge in at Trinity Lutheran Church. They had one son Kip.

Jack joined the Army and served from 1951–1953 as tank commander, after receiving his honorable discharge he ran a Conoco gas station in Bridgeport for a few years, then went to Telegrapher school for Union Pacific Railroad in Pueblo, Colo. He came back to Kimball to work for the Jim O'Neil Ford Garage as parts manger, and then worked for Dale Danielson at Dale's Paint & Body Shop. In 1978, he moved back to the house he grew up in. In 1983, they moved to their new home where he lived until his passing. After moving back to Dalton he farmed with his brother until his brother's death and continued farming with his son Kip. Jack was looking forward to plowing this spring, he loved to plow.

Survivors include: (1) son: Kip and wife Twyla; nephew Scott Worth and numerous extended family members. He was preceded in death by his parents; (1) brother Jim"Curly" and his wife Evelyn.