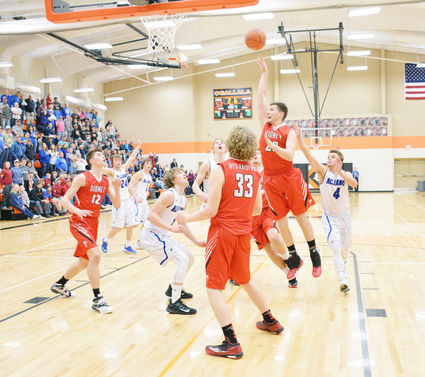 Donna Wiedeburg / For the Sun-Telegraph

Sidney's Cutter O'Connell hits the game-winning shot in the final seconds in Monday's District B6 semifinal against Alliance. The Raiders won, 54-53, to advance to tonight's 6 p.m. district final against Scottsbluff with a berth to the state tournament on the line.

It was Tyler Wintholz to Cutter O'Connell for the win Monday night.

O'Connell hit the game-winner with about a second left after receiving the pass off a Wintholz drive to lift Sidney to a 54-53 victory over Alliance in the District B6 semifinals in Ogallala. The Raiders (22-3) now face Scottsbluff, a 65-41 winner against Gering, in Tuesday's 6 p.m. district title game in Ogallala.

"We've had a lot of close games and games that have come down to the last possession, and we're really fortunate to be on the winning side in all of them," Sidney coach Erik Kohl said.

On Monday, the Raiders had...