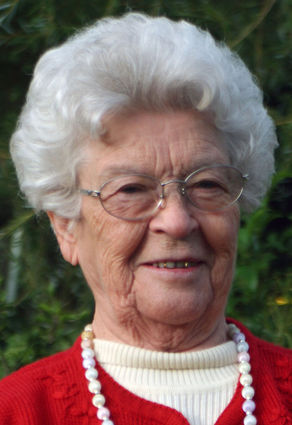 Funeral services will be held at 10:30 a.m. on Friday, March 18, at Gloria Dei Lutheran Church in Lodgepole with Pastor Kathy Montera officiating. Interment will follow in the Greenwood Cemetery in Sidney. Family and friends may stop at the Gehrig-Stitt Chapel from 1 to 7 p.m., Thursday, March 17. In lieu of flowers memorial contributions may be made in her name to Gloria Dei Lutheran Church.

You may view Ilene's Book of Memories, leave condolences, photos and stories at http://www.gehrigstittchapel.com.

Ilene was born in Kearney to Oscar & Selma (Rahe) Humphrey on July 2, 1920. She was one of seven children. She went to school at Lodgepole Schools and graduated in 1938. She married Melvin H. Jurgens in November 1938. To this union five children were born.

Ilene started working at Wise's grocery store in Lodgepole and worked there for many years. Melvin passed away in 1963, so Ilene decided she needed to do something different so she enrolled in nursing school and completed her course in 1972 as an LPN. She then went to work in Chappell at the nursing home and continued to work until she married Ed Stewart of Lodgepole. She then moved to Ed's farm south of Lodgepole where she enjoyed being a farmer's wife. She enjoyed driving the riding lawn mower, her large garden and helping Ed out with the field work. After Ed passed away she moved to Bassett to be near her daughter Elaine and her family. She lived there until November of 2015 when she moved to Fort Collins to be close to her son Gary and family. She always wanted to move back to the farm.

Her biggest enjoyment was her family, especially all the young great-grandkids and then the great-great-grandchildren.

Ilene is preceded in death by her husbands: Melvin H. Jurgens and Ed Stewart, her son: Melvin (Ike) Jurgens, her daughter: Elaine Bussinger, her parents, (5) brothers and sisters and (1) grandson: Jamie.