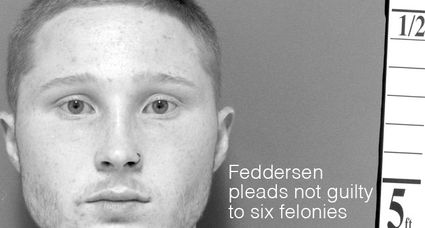 Feddersen is charged with robbery, use of a deadly weapon to commit a felony, second degree assault and burglary, all Class II felonies, and strangulation and terroristic threats, both Class III felonies.

With the charges of robbery and use of a deadly weapon, Feddersen faces 50 years in jail maximum for each charge and a minimum one year each.

For the charges of second degree assault and burglary, Feddersen faces 20 years maximum, with no minimum.

Sidney Police Department was dispatched on Aug. 31 at 1:42 a.m. to Spruce Street in response to a reported assault, according to an affidavit released by the Cheyenne County Attorney's Office.

The officer entered the residence and discovered a male, identified as Ryan Stattner, 19, "laying on the couch with his face covered in blood."

Peggy Stattner, on the scene, told officers two to three males had "entered through the bathroom window." Officers found the window screen had been cut open large enough for a person to fit through. Belongings were scattered about the bedroom, and dresser drawers were pulled out onto the floor. Reportedly, $3,000 had been stolen.

The suspects fled on foot.

Another officer reported finding the grass beneath the bathroom window crushed, "as if someone had been standing or kneeling in that area." Several shoe prints were found around Stattner's vehicle.

Ryan Stattner, while being treated for his injuries, identified Feddersen as one of his attackers. He had "pulled off his mask and seen his face."

According to Stattner, he had been sleeping. He was woken up when he was struck in the back by a crowbar, flipped over, and repeatedly punched in the face. He was then choked, and blacked out as he was struck repeatedly in the head with a crowbar or wrench.

Officers visited Feddersen's residence at 3:45 a.m. and he was brought to the SPD station.

A friend and former classmate of Stattner's, interviewed by SPD officers, said she had taken a photo of the $3,000, which Stettner was going to use to buy a car, and posted it on Instagram. She had taken it off at Stattner's request. Feddersen, though, had taken a screen capture of the image, and questioned her about the money.

Feddersen, during his arrest, "denied taking part in robbing Stattner."

A status hearing is scheduled for Dec. 6.