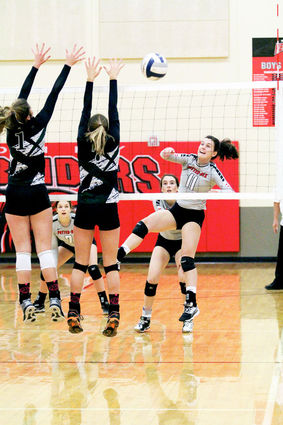 Payge Hoffman from Potter-Dix hits a point past Creek Valley defenders Payge Misegadis (1) and Jersie Misegadis in the D2-12 SubDistrict Championship Tuesday. Potter-Dix won the championship in the final set, 16-14.

Tuesday night had ut a high energy volleyball contest in the gymnasium as Potter-Dix and Creek Valley battled for first place in the D2-12 SubDistrict.

The two teams entered the court with the competitive history of the season and the drive to reach the next level of play.

Creek Valley came out strong, dominating the first set 25-11. The Lady Storm of Creek Valley performed as the golden child while Potter-Dix's Coyotes were building their momentum. The Lady Storm earned nine points before allowing the Coyotes their first point of the night. The Coyotes gradually added points to their cause until the Lady Storm took their 25th point. The Coyotes' momentum continued to increase into the second set when they took the win 25-23. The score was nearly the same for the third set when the Coyotes claimed another win 25-22.

The Lady Storm came back for the fourth set to win 25-15.

The fifth match, scheduled for a 15-point decision, was probably the hardest fought set of the night with numerous marathon volleys and outstanding saves. The decision went to the Coyotes 16-14. As the point was affirmed, the gymnasium went wild with jubilation and tears of disappoint.

"It was a tough loss," said Creek Valley interim coach Missy Koenen. "The girls played their hearts out."

She said the Lady Storm played the way they needed to against Potter-Dix.

The Potter-Dix Coyotes traveled to Bayard Thursday to face Hyannis. Hyannis is the top-ranked team in the D2 class with as 10-0 record. The Coyotes entered the match with a 9-1 season record.