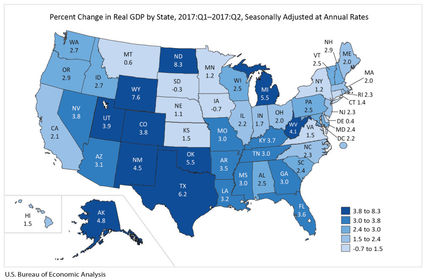 OMAHA, – New and revised government statistics from the U.S. Bureau of Economic Analysis (BEA) at the Department of Commerce show Nebraska's economy grew in the 2nd quarter of 2017, but that the state technically went through a recession first before returning to the black.

Growth was significantly weaker in Nebraska and the Plains states than in most of the country in the 2nd quarter, and BEA statistics show that comes on the heels of two consecutive quarters of negative economic growth in Nebraska in 2016 and 2017.

The BEA's press release with the following statistics is attached. The...