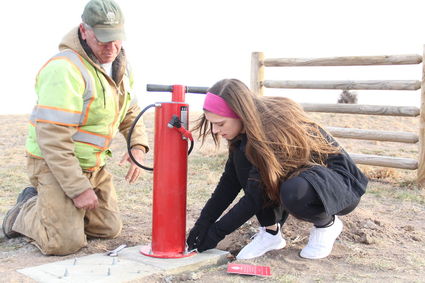 Sarah-Kate Splichal and Sidney Parks Superintendent mount a bike Fixit station to concrete mounts near WNCC College, the first of Splichal's Fixit stations to be installed along the Sidney bike and walking path.

Splichal's project is part of work toward her Gold Award, the highest award for Girl Scouts and is equivalent to the Boy Scouts Eagle award.

Splichal presented her project to city council in August, explaining she thought about the project after she wrecked her bike going up a hill on the local bike trails. Sarah-Kate says that when she finally returned home with her bike she start...