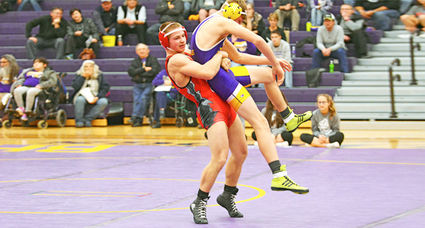 Sidney's KC Higer picks up Bridgeport's Josh Warren on the way to a technical fall win Thursday. Higer was 4-1 overall at the UNK Duals Tournament Friday, taking his season record to 35-1. Higer and the Raiders will have their lone home appearance tomorrow, hosting Sedgwick County.

In a powerful field at the UNK Duals Tournament, Sidney used a 44-27 win over Holdrege to earn fifth place overall.

Brady Robb led the way for Sidney, winning four matches by pin in 3:56. Robb averaged less than a minute on the mat with his pin victims, but two of those matches were over much quicker. Robb closed out the tournament with a 16-second pin of Damian Smith from Holdrege....