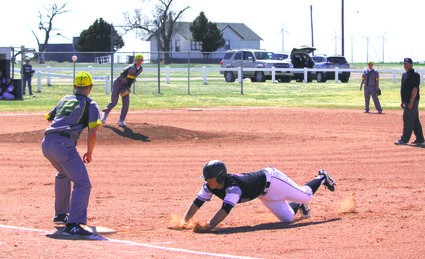 Sedgwick County's Cougars brought their bats, running game, and patience to the plate Tuesday en route to a 21-9 victory over the Peetz Bulldogs.

Sedgwick's skill at getting runners on base and putting constant pressure on opposing defenses translated to a 9-1 start for the Cougars.

Starting Pitcher Logan Sircy struggled with his control, walking two and surrendering three hits in two innings while misplays and errors had him giving up five runs. In the first inning, the Cougars were able to plate two runs with a sacrifice fly and a passed ball. Against Sedgwick starting pitcher sophomore...