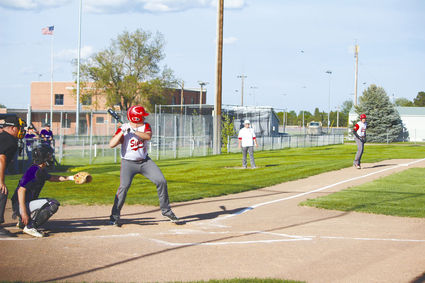 After a successful showing in the Chadron Wood Bat Tournament over the weekend that had the Sidney team earning its' first two wins of the season, the Sidney boys struggled against the Gering squads.

The first game was between the junior teams and Gering was able to break out against the home team early, scoring six runs in the second inning en route to a 13-5 victory in a run-rule shortened five inning contest.

Many of the junior players also play on the senior squad, and with mid-90 degree temperatures in the panhandle region, it proved to be a long afternoon for the Sidney team.

In the Senior game, starting pitcher Kyle Lenzen was victimized by an error in the first which extended the inning, and led to a two-run homer by the Gering team to put Sidney in an early 2-to-0 hole.

Gering extended their lead to 4-to-0 until Sidney's Zach Holtz notched his first RBI of the season, driving in Nathan Hofrock to make the score 4-to-1 in the bottom of the second inning.

Sidney was able to tie the score at four in the fourth, taking advantage of two Gering errors. After a pitching change, the visitors managed to get out of the inning still tied, with Sidney leaving the bases loaded and missing out at their chance to break the game open.

The game stayed tied until the sixth, when Gering capitalized on three Sidney errors to score four runs to make the score 8-to-4. The Sidney players were unable to respond in their half inning, and in the top of the seventh Gering added five more runs to extend their lead to nine runs. Sidney went down quietly in their half of the seventh, and Gering came away victorious with a final score of 13-to-4.

Sidney had nine hits, five errors, and stranded 12 runners on base in the loss. Pitcher Sam Hashman was tagged with the loss in relief, making his record 0-2 for the season. The Sidney senior team has the week off, and is scheduled to host Chadron on Wednesday.