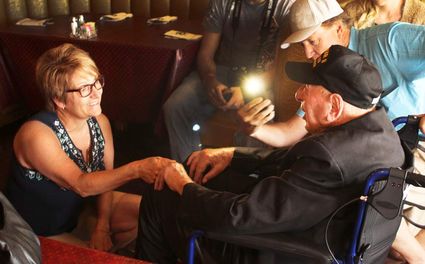 World War II veteran Sidney Walton made his first visit to Sidney Thursday on his "No Regrets Tour." The 50-state tour is hosted by his son Paul. He said the intent is to see people who may not have had the opportunity to meet a World War II veteran.

Nearly every person can think of a time or event that has lingered as an "if only I had..." memory. The change to do something daring or to take a chance with a career opportunity or a relationship.

Sidney Walton and his son Paul decided to address the regrets in life as part of a bucket list tour. Sidney Walton has the honor of being a surviving World War II veteran, one of a constantly decreasing few. With the number of veterans diminishing, they decided to tour the United States. It is a bucket list tour because the tour is scheduled for them to return home in time for Sidney's century...