'Changing of the Guard' in Sidney Code Enforcement 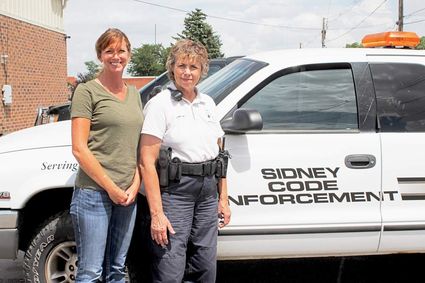 A little more than 17 years ago, a police officer was directed with enforcing the Sidney City codes. In addition to the duties associated with being a police officer, there was citing residents for overgrown weeds, inoperable vehicles and other issues written within the city code.

That changed when the city was awarded a grant to fund a position specifically for code enforcement. The position was later funded as a specific title within the Sidney Police Department.

Joanie Matthes has had the title of Code Enforcement Officer since it was established. She recently ended her 17 year run to move to Lincoln, Neb. Her main goal is to be closer to grandchildren. In her 17 years as Code Enforcement officer, she has worked closely with the department and the City on knowing and enforcing the City nuisance codes.

"Summer time is the busy time with weeds," she said.

In the summer, most of her calls for service start as complaints; about 60 percent complaints and 40 percent observed violations, she says.

What keeps a person in the same line of work for 17 years? Matthes says it is in part at least a care for the city.

"It was a drive to clean up the city," she says.

Her last day was Friday, July 13. A reception was held by City staff in recognition of Matthes' service.

Lisa Hanley is taking over as Code Enforcement Officer. Hanley comes to the City of Sidney as a former Cabela's employee. She spent 15 years in the desk and office environment, seeking a way to stay in Sidney when the Code Enforcement opportunity came up.

"It was just a challenge to do something I've never done," Hanley said.

She added in addition to new challenges, the opportunity keeps her and her 13-year-old son in Sidney.

"It was important for me to stay in Sidney," she said.

Closing this chapter in her life, Matthes said the job allowed her to meet a lot of people; some nice and others not so nice. Not seeing the friendships will be the hardest part of leaving, according to Matthes.

"I'm ready for some new things," she said.