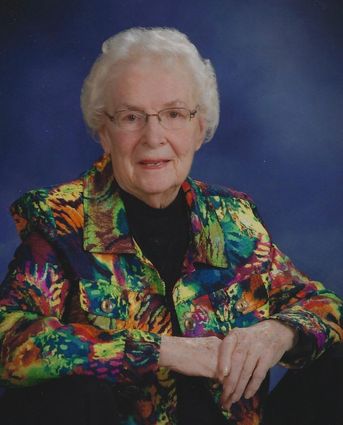 On July 21, two days prior to her 90th birthday, lifelong Gering resident, Marthabelle "Tad" (Ehrman) Schuemaker, passed away at Heritage Estates in Gering.

Her funeral service will be held on Wednesday, July 25, 2018 at 10:00 a.m. at Gering United Methodist Church with Pastor Seth Leypoldt officiating. Interment will follow at West Lawn Cemetery. Visitation will be Tuesday from 2-6 p.m. at Gering Memorial Chapel. Memorials have been established to the Gering United Methodist Church and the Gering Public Library.

Tad Ehrman was born on July 23, 1928, to William and Lola (Pharoah) Ehrman on the farm east of Gering. She attended grade school in Melbeta and high school in Gering. While attending Chadron State College, she met her husband, Jim Schuemaker from Banner County, and they married August 14, 1949. To this union two daughters were born, Cheri and Colleen.

Tad taught kindergarten and first and second grades at Gering Valley, Melbeta, Lake Alice and Minatare. In 1976, she began working at the Gering Public Library. Her interests were sewing, needlepoint and embroidery, painting, quilting following her daughters, grandchildren, and great grandchildren in their activities, and Nebraska football and volleyball.

Through the years she taught Sunday School, Bible School, and led 4-H clubs. She and Jim enjoyed playing Pinochle with longtime farmer friends the first Saturday night of the month. She was fond of traveling.

She was lifetime member of the United Methodist Church attending the churches in Melbeta and Gering.

She was preceded in death by her husband Jim, her parents, sister and brother-in-law Elaine and Warren Barnhard, brother and sister-in-law Bill and Frances Ehrman, and baby brother George Raymond "Punky" Ehrman.