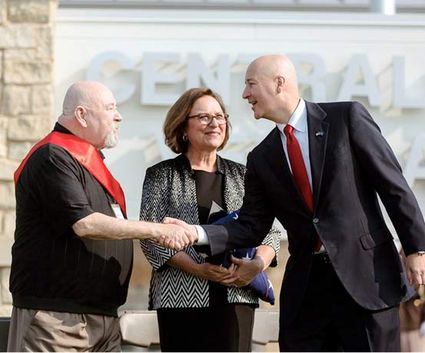 "This new state-of-the-art facility for our veterans is a reality thanks to the teamwork of Nebraskans working together at all levels – local, state, and federal," said Governor Ricketts. "Our state has a long tradition of honoring its veterans, and the new Central Nebraska Veterans' Home builds on that legacy. This home is an important part of our mission to make Nebraska the best state in the nation to serve in the military or be a veteran. It represents a little piece of what we can do to give back to those who sacrificed so much for our freedoms."

The CNVH is a 338,000-square-foot facility that is comprised of ten buildings on 67 acres. The main building, named Juliet, is home to administration offices, a chapel, library, ceramics area, woodshop, Foxhole Lounge, guest rooms for traveling visitors, pharmacy, medical clinic, dental suite, and more. Connected to Juliet are two hubs, Golf and Hotel, which house physical, occupational, and speech therapy areas and a restorative kitchen. The therapy area will be one of the few in the country with an anti-gravity treadmill.

"This is an exciting day for our agency, the veterans we serve, and all the citizens of Nebraska," said NDVA Director Hilgert. "Our agency's sole purpose is to serve the veterans who have so bravely served us, and this facility will allow us to better do that. It is unique with its home-style layout and will house state-of-the-art therapy and rehabilitation equipment, giving our teammates better tools to care for our veterans."

The two hubs branch off to three neighborhoods each. Inside the neighborhoods are a communal dining room, living room, kitchen, den, and the members' 225-square-foot rooms with private bathrooms. The neighborhoods are tailored for different types of care, including domiciliary, memory support, and skilled nursing. In total, there are 225 units for members to live in the facility.

"In Nebraska, we honor our veterans not only with our words but with our actions," said U.S. Senator Deb Fischer, who attended the ceremony and addressed the audience. "I was proud to take part in the opening of this new 225-bed home that will serve Nebraska's veterans. This beautiful facility was made possible by good cooperation at the federal, local, state, and community level."

- Merging the NDVA and the Division of Veterans' Homes to create a one-stop shop for veterans' services in Nebraska.

- Approving a 20 percent pay increase for staff care technicians working for the NDVA.

- Expanding the hiring preference in Nebraska to include spouses of service members.

- Waiving the requirement for veterans to resubmit certification for a key property tax exemption if no change in medical condition has occurred.

- Creating five additional Military Honor License Plates to recognize the service of members of the reserves of the armed forces.

- Approving revisions to Rule 21, allowing military spouses to receive a three-year teaching permit in Nebraska with a valid out-of-state license.

- Signing LB 88e (2017) into law, which authorized the Department of Health and Human Services to issue temporary licenses for occupations regulated under the Uniform Credentialing Act to military spouses.