Seattle Woman Includes Sidney as Part of Her Adventure 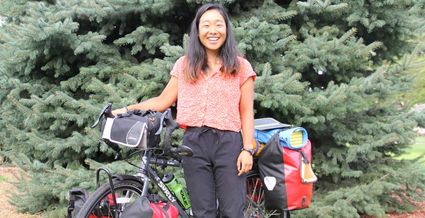 Lisa Hirata made a stop in Sidney as part of her bicycle journey across the country, receiving the offer of a soft bed from a local resident over her normal tent accommodations. Her four-month trip began in Seattle and had zig-zagged across the western U.S.

Like a busy bee flitting from flower to flower, a young Seattle, Wash. woman landed in Sidney over the weekend, getting her first taste of what Nebraska has to offer.

At 25, Lisa Hirata has been traveling the western United States in a wandering course, much like a honey bee looking for the best flowers to draw from. But instead of pollen, Hirata is drawing from the experiences of life and the people it brings across her path.

Her course is not only zig-zag, but extremely wandering as she makes her way east. She went down the west coast to California, across to New Mexico, up to Yellowstone, back down through Colorado and is on her way back north. Hirata said she doesn't really have a route of travel with the exception of her destination of Minnesota and a week-long canoe trip with friends. Along the way, "I'm just going to places I've wanted to see."

In between, she runs through small towns along the way soaking in what experience they have to offer. When she reached Sidney, she was looking for a place to pitch her small tent when a local family offered to let her stay at their home.

That's the type of thing she said stands out about her trip.

"The people I've met," she said quickly when asked what stands out so far. "Like when I stopped here and they (her Sidney family) offered me a place to stay. That happens a lot, more than you would think."

And each stop brings a learning experience. In New Mexico, she met a family that had built a home of recycled materials, living completely off the grid. In Sidney, she learned about Runzas - described as one of the things unique to Nebraska that she should try as she crosses the state.

But whether it's a Runza or a national park, each gives Hirata an experience - the primary purpose behind her trip.

While she rides about 80 miles or so a day, Hirata said she likes taking her time.

"It's never about mileage," she said. "It's about the experience. Sometimes I'll go another way because someone told me about an interesting town or area.

She enjoys being outdoors - which fits into her background and the career she's followed so far. She has taken a month-long kayaking adventure from Seattle to Alaska with her brother. After college, she put her degree in environmental studies to work on the east coast, teaching young people about the outdoors by taking them on camping trips for days to a couple of weeks.

But this trip is one for her. She worked for months to earn enough for the trip. She learned some bicycle repair so she could handle minor problems. But she does admit, not all her preparation was as good.

"I got clip-on shoes so my feet would stay on the peddles better during the long days," Hirata said. "But I only got them about a week before I left and I wasn't used to them. One time I couldn't get them unlatched and I just fell over."

She laughs at the memory, saying more practice would probably have been helpful, "but it's also been part of the experience."

At five feet with a slim build, it appears Hirata might be outweighed by her touring bike and array of packs that carry her belongings. She said she has learned how to manage, though, making good time as she travels. She does, however, go slower through hilly terrain, which makes her mileage totals diminish.

In her bags are a change of clothes, sleeping bag, tent, tools, a paint set, food, small cook stove and fuel, and water - "lots of water."

She carries about three days worth of food, knowing that at times she may not always be near a store, but figures in those three days she'll be able to find a place to re-stock. As for the paint set, she said she does occasionally get the chance to paint - sending the finished product back to family.

Otherwise, she listened to music and, she says with another laugh "I talk to myself."

Hirata said she hasn't worried a lot about her safety, even in the light of recent national news. She is mindful, "but I don't dwell on it a lot."

By mid-October, Hirata's adventure will be over. She set out July 4 and gave herself four months to travel, expecting to turn south after her stop in Minnesota. She said she had to give herself the deadline to stop.