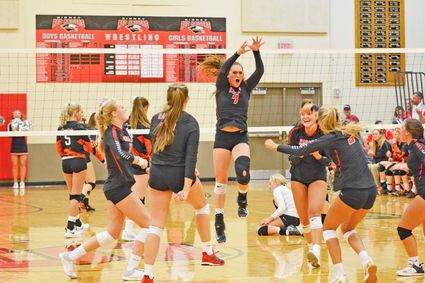 Sidney sophomore Logan Holly jumps high after the final point and celebrates with her teammates as the Lady Raiders defeated Ogallala for the first time in four years on Thursday.

Sidney's Lady Raider Volleyball team hosted a triangular meet on Thursday at Sidney High School, and the North Platte and Ogallala teams came in ready to set the tone to start the season.

First, Sidney played North Platte, and the teams squared off in the first set with no team gaining advantage through the beginning stages of the set. Sidney finally took a 7-to-5 lead on senior Mattie Johnson's block, and seemed to finally gain momentum against the Lady Bulldogs. But North Plate came back to tie at 7, and the set continued to be a back and forth battle until Sidney was able to open a three...