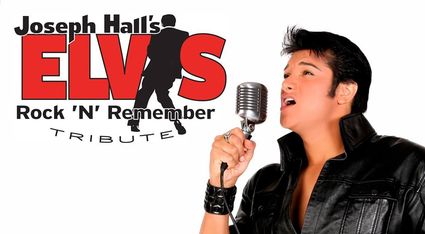 "Elvis" is entering the county.

The concert will be held in the Sidney High School Performing Arts Center at 7 p.m. Tickets are $12 for adults, $6 for seniors and $5 for students. Tickets are available at the door. Tickets can also be purchased in advance by contacting the show's local producer Pam Arrington at 308-249-0345.

Joseph Hall, a Lincoln native, has been playing tribute to Elvis Presley since 2006. He has toured from coast to coast and in Europe. He has appeared on Good Morning America, USA Today, Fox News and The Morning Show. He has also performed with "Legends in Concert" and worked with Elvis Presley Enterprises. He was also a Top Ten finalist on Season Three of America's God Talent, won the "Spirit of Elvis" award, placed third in the "Ultimate Elvis Tribute" contest and headlined his own show in Branson, Mo., for six seasons where he was named Branson's 2014 Male Performer of the Year and earned 2014 Tribute Show of the Year honors.

"What I love about Elvis is he can match any mood. If you are feeling young and energetic, listen to his 50s stuff. If you want powerful ballads, his 70s music is so moving, it will make you cry. And if you want a life -changing experience, listen to his gospel music," Hall said in a press release.

Hall plans to include music from each of Presley's categories in his two-hour show in Sidney. He said his goal is to capture the essence of Elvis Presley and to pay tribure to him with the utmost respect to his legacy, his music, his image and his fans.

Hall returns to Sidney a little more than two years after doing a veterans benefit in Sidney.