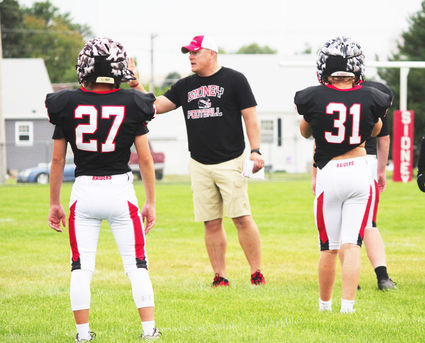 Sidney head coach Chris Koozer has decisions to make regarding next season's roster, and has a talented group of underclassmen eager to compete for spots on the Red Raider varsity team.

After the final gun had sounded and the gear was packed, the long bus ride home from Ord gave the Red Raiders the chance to reflect upon their final game as a group and the entire season.

It was a season that started well with three straight dominating wins, then three losses, and then three wins to finish the regular season. However, those middle three losses ensured that Sidney's first round playoff game would be against one of the top seeded teams in the bracket, which turned into a quick exit from the tournament for the Red Raiders.

With some time to digest the 52-to-21 defeat against the Chanticleers, Sidney head football coach Chris Koozer had nothing but praise for his team.

"We played the game to the best of our abilities and talents", Koozer said, adding "but that Ord team is really something special. Their team speed is overwhelming and they put us in a position to have no margin for error."

Ord was able to capitalize on every Sidney mistake, and put the Red Raiders in a position of playing from behind quickly in the game. That pressure led to pressing, which caused more mistakes such as penalties and turnovers, which Ord again capitalized upon to drive Sidney deeper into a hole they could not escape.

"They used a lot of zone schemes on defense to stop our runs, and their guys were really good at getting off our blocks and plugging up holes", said Koozer, adding "and on offense they made us defend the flats and just had too much speed for us to contain. Their quarterback (Jesse Ulrich) is the real deal and I fully expect him to end up in a major college program."

At halftime, coach Koozer said to the team, "Don't worry about the score at this point. The second half is our "pride half." We're going to play hard and execute and represent what our program and this community is all about."

Although the game was out of reach, Sidney was able to limit the Chanticleers to just seven points in the second half, and put together a 16 play 76 yard drive featuring tough runs and a few timely passes that resulted in an Eli Ahrens one yard touchdown score.

"That was good to see, we really put together a nice drive. Showed everybody that there is no quit in this team," said Koozer.

"This was a really special season, as it was my fourth year and getting to see the seniors that I started with when they were freshman grow over four years was awesome. The dedication and effort they all put in is what makes our program special. I'm very proud of them," he added.

His thoughts turned to next season, and he said, "It's wide open, seriously. We really have a lot of talent returning, but nothing is set in stone. It's going to be a competition for positions as soon as camp opens."

Sidney usually holds its' football camp after Memorial Day, and the team has a few days to work out and practice while bonding together and getting into the team mindset. Additionally, Sidney also plans on another camp at another location that lets the team scrimmage and practice with other regional football programs.

"Oh, it's a really great thing", said Koozer, adding, "the boys get to be away and together as a group, and practice with other squads. It really helps get the boys together as a team and they also get to see how other teams practice and conduct their business. Plus, we get a great look at what we have, and it helps us figure out who's going to play where."

Sidney returns a solid group of experienced underclassmen, but Koozer will not know how the team will look on Opening Day until deep into the summer.

"It's all about adjusting to the speed of the next level that's going to determine who ends up where", said Koozer.

"At each step, like from junior varsity to varsity, the game speeds up. Then in the playoffs, it speeds up even more. You have to adjust to that, and most importantly go all out on every play. We saw that firsthand in Ord," Koozer explained.

Sidney looks to have a few holes to fill in some positions, but is loaded at others such as running back. This bodes well for the Red Raiders, as their strengths emphasize their running attack.

Sidney returns Eli Ahrens and Zak Wieser, and have a talented group of underclassmen including Beau Wamsley vying for a varsity spot. And although the lines will lose Zak Pettit, Jackson Witt, Lane Hughes, Quinn Siler, and Gabe Shoemaker to graduation, they have an experienced group returning keep the lines a Sidney strength.

Look for Sidney to build upon this year's success with another winning season and playoff run in 2019.