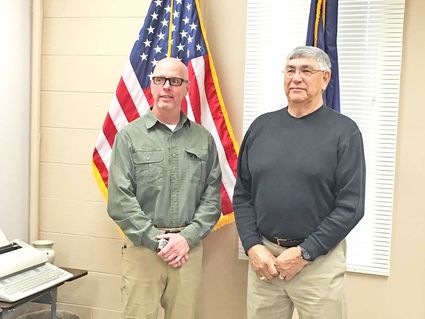 Cheyenne County Sheriff's Office Chief Deputy Fred Wiedeburg, left, was appointed Monday morning as the new Veterans Service Officer. He will be working part-time in the Veterans Service Office through December as a transition period, and part-time with the sheriff's office until he takes the reigns full time in January. Until then, Veteran Services Officer Ron Gusman, right, will remain on duty full-time.

Gusman said Monday there are about 750 veterans in Cheyenne County, and likely more who are not aware of the service or do not take advantage of the programs.

"I've got some big shoes to fill," Wiedeburg said Monday.

Gusman said he is confident in Wiedeburg's energy and ability.

Commissioner Chairman Darrell Johnson commended Gusman on his service for the county veterans.

In other business, the commissioners approved County Treasurer Diane Scott to transfer funds totaling $816,000 from the Cheyenne County Road and Bridge Fund to the Road Sinking Fund. Scott said the transfers were already approved, but there were no dates documented. She told the commissioners it would be wise for them to formally authorize her to transfer the funds within a specific time period.

County Clerk Beth Fiegenschuh told the commissioners of an award presented to the county. The Nebraska Intergovernmental Risk Management Association (NIRMA) recently recognized Cheyenne County for its support of the organization. NIRMA is a not-for-profit, member-owned and operated risk management and self-insurance pool designed by and for Nebraska counties, according to the organization's website. NIRMA was created in 1988 under the Intergovernmental Risk Management Act and the Interlocal Cooperation Act. The organization is subject to all applicable rules and regulations of the Nebraska Department of Insurance. NIRMA started with 32 county members, now serving 95 members.