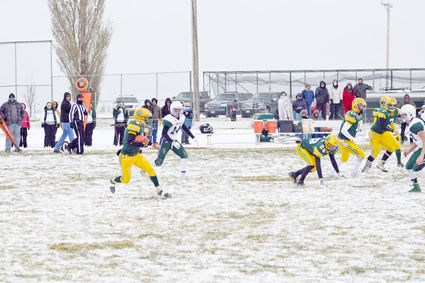 Peetz senior Zachary Holtz returns a kickoff during the third quarter of the Bulldog's 59-20 loss to Stratton/Liberty on Saturday afternoon.

Peetz hosted the semi-final round of the CHSAA 6-Man Football Playoffs against the Stratton/Liberty Knighted Eagles Saturday afternoon, and came up short in their drive for a second consecutive state title, falling to the visitors 59-to-20.

With the loss, Peetz finishes their season with an 8-and-3 record, 5-and-0 in league.

The snow had started hours before the 1 p.m. kickoff, and a coating of the white stuff combined with gusting winds made playing conditions difficult for both teams. Peetz received the ball first, and started on their own 15-yard line after a Stratton/Liberty kickoff sailed deep into the end zone for a touchback.

Peetz's strategy called for a big rushing day from senior standout Bryson Long, and he started with two consecutive runs for a total of eight yards. After a false start penalty on third down, Peetz needed to convert on third and 11, and although Long completed a pass to junior Cooper White, it wasn't nearly enough to move the chains, and the Bulldogs punted on fourth and 7, and Stratton/Liberty started at the 40-yard line.

The Knighted Eagles also struggled with the conditions, with a loss on second down caused by the slippery conditions, and the Bulldogs defense holding on for a turnover on downs after a fourth and 5 pass fell incomplete. Peetz's Long then ignited the running attack with a 24-yard carry on second down, breaking tackles and dragging defenders until the end of the run.

A few plays later, Long broke through the middle and scored the first points of the day on a 7-yard run up the middle for a touchdown. A successful point after kick made the score 8-to-0 for the Bulldogs.

Stratton/Liberty answered quickly after starting their drive on Peetz's 34-yard line, needing just two plays to score on a 29-yard touchdown run by sophomore Jaret Lichty, and after a successful point after kick, tied the game at eight. Peetz had an unproductive offensive series, and after a shanked punt by senior Zach Holtz, the Knighted Eagles started on the Peetz 30 yard line. The Bulldogs were able to contain Stratton/Liberty, and the Knighted Eagles turned the ball over on downs just inside the Peetz 20-yard line.

The Bulldogs took over, but on second down Long fumbled on an exchange in the backfield, and the Knighted Eagles recovered the ball on the Peetz 15-yard line. There had been many drops and mishandles of the football due to the weather conditions, but this was the first of the game that resulted in a turnover.

Stratton/Liberty quickly capitalized, and on a third down run they scored a touchdown on a counter play that had the entire Peetz defense moving in the wrong direction. Peetz senior Xavier Runge was able to block the point after kick, and Stratton/Liberty held a 14-to-8 lead in the second quarter.

Peetz started their next drive in good field position after recovering a squib quick, but after gaining a first down the Bulldogs were forced to punt again. The Knighted Eagles took over, and on their first play gained 17 yards and looked to be driving again. But a third and 14 pass by Stratton/Liberty senior Tyson Lichty was intercepted by Bryson Long, and he galloped 47 yards to score the Bulldog's second touchdown of the game, and after an unsuccessful point after attempt, the game was again tied at 14.

The Knighted Eagles then started another drive at their own 22 yard line, and were able to to gain big yards running the ball around the ends, and found themselves in scoring position with four seconds left in the half. Stratton/Liberty's Jaret Lichty was able to shake off an attempted tackle by Zach Holtz to break into the endzone, and after a successful point after kick, the Knighted Eagles ended the half up 22-to-14.

The second half started similarly to the first, with both teams trading three-and-outs on their first possessions. But on Stratton/Liberty's second possession, senior Ethan Richmond broke a 34 yard touchdown run that increased the Knighted Eagles lead to 28-to-14 after an unsuccessful point after attempt. Peetz tried to respond, but a third down pass by Long to Runge was dropped to force another punt for the home team. Stratton/Liberty responded again with another long run for a touchdown, this time 36 yards by Lichty, and after a successful point after kick, the Knighted Eagles increased their lead to 36-to-14 and were in full control of the game. Stratton/Liberty was able to score 22 points in the third quarter while shutting out the Peetz offense.

The Bulldogs were able to score one more touchdown in the fourth quarter on a Bryson Long 46 yard touchdown run, but the Knighted Eagles were able to engineer five straight touchdown drives after their initial three-and-out to start the second half, and went on to win the game 59-to-20 to advance to the championship game next Saturday. Peetz was unable to stop the running attack of Knighted Eagle's Lichty and Richmond, while the visitors were able to limit Bryson Long to three touchdowns on the day.

The Bulldogs end their season with an 8-and-3 record, 5-and-0 in league while the Knighted Eagles will host the Kit Carson Wildcats on Saturday for the CHSAA 6-Man championship.