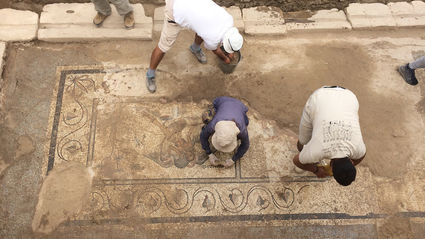 LINCOLN – A rare, second-century figural floor mosaic has been unearthed in the ancient Roman city of Antiochia ad Cragum on the southern coast of Turkey.

The newly discovered mosaic features unusual composition and risque subject matter - essentially ancient dirty jokes about the mythological characters Narcissus and Ganymede. The mosaics adorned the floor of a marble-lined public latrine that apparently served patrons of the adjacent Great Roman Bath Complex and those attending events at a nearby bouleuterion, or council house.