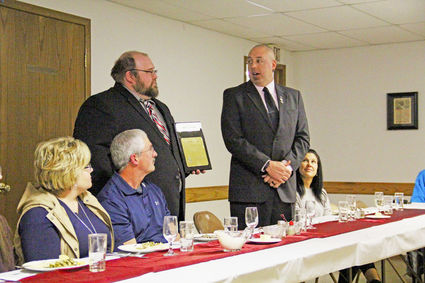 Worshipful Master Nick Makris, standing, left, listens as Mason of the Year Kevin Wynne thanks him for the award. Also listening are Stephanie Mika and her husband Steve, who were present as the Frank Welch Lodge #75 recognized Stephanie's father, Ken Foland, for his work.

Sidney's Masons celebrated their best this week at Frank Welch Lodge #75 recognizing three Masons for their contributions to the community.

While unable to be present because of other obligations, Jack Thorpe was named Citizen of the Year. As Worshipful Master Nick Makris put it, Thorpe works tirelessly in the community, epitimizing the word "service."

Mason of the Year went to a Kimball Mason, Kevin Wynne, of the James L. Eatmon Lodge #294. Wynne was recognized for his effort drawing Masons from nine lodges in five states for a Masonic function in Kimball this year.

Also recognized, and re...