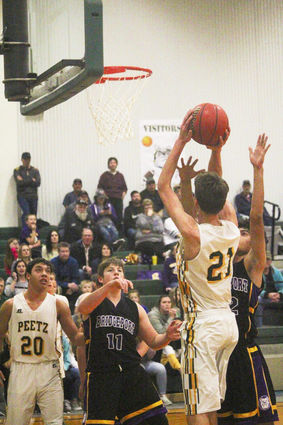 Peetz senior Dominick Naegele puts up two points during the Bulldogs' 51-to-33 loss to Bridgeport on Friday.

Peetz lost its second game of the season on Friday as the visiting Bridgeport Bulldogs and their big men proved too much to handle for the home team.

Peetz tried desperately to find a way to get inside to score, but the Bridgeport defense was too tough, and they were able to pull away with a 51-to-33 victory.

The game started with Bridgeport jumping out to a 5-to-0 lead, but the Peetz boys battled back to take a 14-to-10 lead at the end of the period.

Bridgeport came back firing on all cylinders, with their big men starting to take control under the boards grabbing rebounds, and making it difficult for Peetz to get any easy inside shots.

Peetz was plagued by turnovers throughout the game, as the tough Bridgeport defense forced bad passes and ball handling errors. With four minutes left in the second period, the Bridgeport team took a lead, and the Peetz boys were forced to play from behind for the rest of the contest.

Bridgeport came back from the half with a 25-to-19 lead, and continued to dominate under the boards and score with layups, while the Peetz boys continued to struggle for position and with turnovers. By the beginning of the fourth quarter, the visitors had built a 38-to-29 lead, and were cheered on by the large cheering section that made the trip from Bridgeport.

The loss drops Peetz to 4-and-2 on the season.