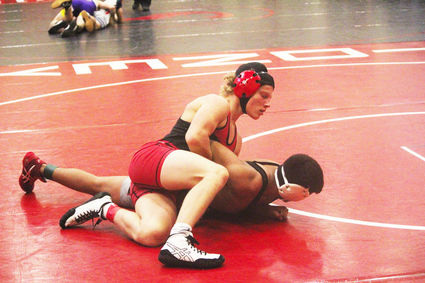 Sidney senior Trey Arellano is in total control of his opponent during recent tournament action. The Red Raiders defeated Ogallala and McCook at the Ogallala Triangular on Thursday.

Sidney's Red Raider wrestling team travelled on Thursday to compete in the Ogallala/Sidney Triangular, and defeated both McCook and Ogallala to take top honors. Sidney defeated Ogallala by a team score of 57-to-19, and defeated McCook by a tally of 39-to-36.