Markers Brought Back to Life 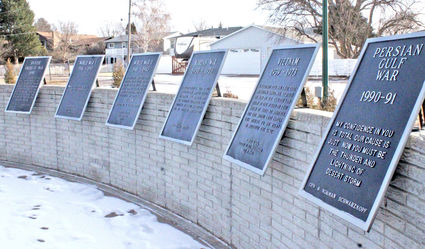 A plaque is placed at the south end of the memorial in Legion Park for each of the battles American soldiers have served in. The plaques were recently refinished.

Near the center of Sidney is Legion Park. Within Legion Park is a memorial that started with the inspiration of a Vietnam veteran.

To the south of the veterans memorial is a half-circle of plaques recognizing conflicts that have claimed the lives of soldiers. It is a quick history from the Indian Wars to the Iraq War. The memorial was recently given a well-deserved facelift.

Al Jung said Friday the memorial was originally done for Vietnam veterans. The Living Memorial Gardens were done in 1982, designed in part by Ivan Liljegren. The memorial was first completed in 1993.

Weather took its toll on the plaques and in time needed maintenance. The flat black background against metallic lettering was losing its luster and needed a craftsman who could restore the appeal.

That is when Richard Teague of Lodgepole entered the picture.

Jung talks of visiting the memorial and seeing all of the plaques gone. He immediately called Sidney police who informed him Teague contacted them before taking the plaques down for maintenance.

Jung said Teague donated the project. He said Jung had the plaques refurbished within about a week.

The American Legion manages the memorial within the city park. The flag, the pride of the park for its size and height, was made by Conserv Flag Company of Sidney. For years, Ken Foland took it upon himself to ensure the flag was raised and properly lowered each day. Foland died this year. "Sparky" England stepped in for Foland.

"He's not a veteran but he does it in memory of Ken Foland, veterans," Jung said.