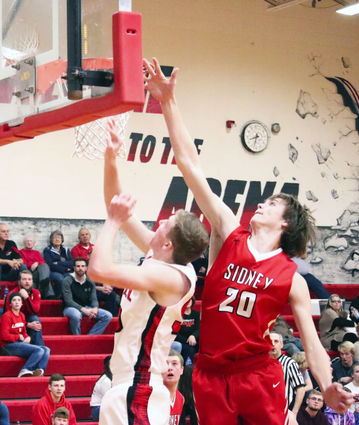 Senior Alex Jallen battles under the boards during Sidney's 44-to-33 victory over Kimball on Thursday.

Sidney's Red Raider basketball team had a busy start to 2019 with two games on the road against Kimball and Gering, then a Saturday matchup against McCook at home. On Thursday, the Red Raider team that had struggled to open the season looked to put all the elements together against a Longhorn team that had similarly struggled in the early going.

The Red Raiders started slowly as the Longhorns went up 6-to-2 while Sidney struggled with turnovers and missed shots. The Raiders had difficulty against Kimball's 1-3-1 defensive set, resorting to long jump shots and three pointers that missed, but...