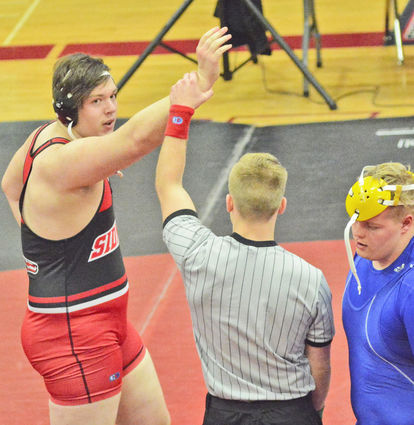 Sidney senior Lane Hughes is victorious during the Gothenburg Invite on Saturday. The Red Raiders took second place overall in a filed of eight teams.

Sidney's Red Raider wrestling team traveled Saturday to compete in the Gothenburg Scramble against a mix of district opponents and some of the top teams in the region.

Before Saturday's tournament, the Red Raiders traveled to Bridgeport on Thursday for a dual meet against the Bulldogs and a chance at a final tune-up before Saturday's competition. After a competitive start, Sidney was able to win four matches in a row on their way to a 48-to-24 win, raising their dual meet record to 14-and-2 on the season.

They kept the momentum going on Saturday, scoring wins against Gering and Holdrege, b...