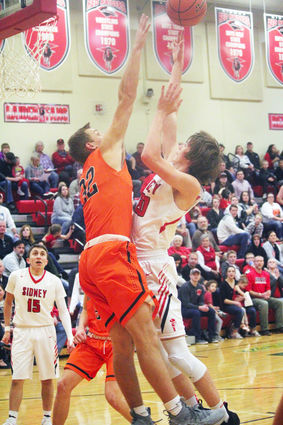 Sidney senior Alex Jallen fights for the ball during Sidney's 62-45 loss to Ogallala on Saturday.

Friday's Senior Night matchup against Ogallala had the markings of a lopsided game, with the Red Raiders struggling to find a winning formula while the Indians entered the night undefeated.

After the jump ball, the casually confident Ogallala squad quickly opened up an 8-to-0 lead, with four points coming off steals of Sidney inbounds passes. Sidney head coach Austion Lewis called a quick time out to stop Ogallala's momentum, and Sidney showed some offense of their own with senior Arik Doty draining a three pointer to get Sidney on the scoreboard.