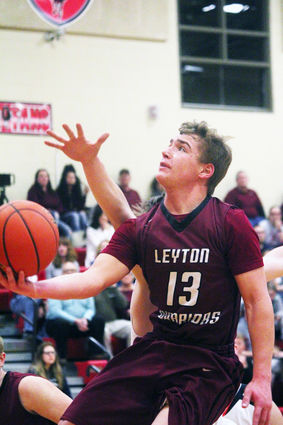 Leyton sophomore Dominick Russ goes up for two in Leyton's semi-final loss against the Bayard Tigers on Saturday.

Leyton's Warrior boy's basketball team competed in the Minuteman Athletic Conference (MAC) basketball tournament that was held over the last week, and after defeating South Platte in a two point come-from-behind victory on Jan 15, earned a trip to the semi-finals on Thursday at the Sidney High School Gym.

On Thursday, the Warriors faced the Bayard Tigers in the semi-final round of the MAC Tournament, and Bayard entered the game as a heavy favorite.

The Tigers opened the game with a 14-to-0 run, with Leyton turnovers and the Tiger's defense preventing the Warriors from scoring. Bayard senio...